Advice abounds for women looking to score a guy, and some sources actually have solid suggestions. But while these sources tell women all kinds of strategies for being approachable or meeting new people, none of them address the most important matter: appearance. A number of the articles I've read have promising titles or sub-titles, but they qualify the initial admonition to "look good" with so many caveats and clarifications that by the end they've essentially told the reader to "be herself" - which is nothing more than a waste of her time.

The topic is avoided because women do not realize how controllable their appearance is. This is understandable, because if female beauty were not controllable, telling a woman she could attract more men if she would just improve her looks would be no more useful than suggesting a paraplegic man "just" learn how to dunk a basketball to impress women. On top of providing no worthwhile advice, it would serve as a painful reminder of her inadequacies. However, the notion that a woman's attractiveness is anything less than highly controllable is patently false.

Time and time again, I see the same thing: the women who aren't getting attention from men fall almost entirely into two categories:
Hopefully you noticed something important about this list: it does not include women who have "ugly" faces, or even deformities. Obviously, natural good looks cannot be overlooked, but they are given far more credit than they deserve. It is the height of hyperbole - you might even say a myth - that women are either born attractive or not.

To drive this point home, I spent entirely too much time identifying the various components of feminine beauty and quantifying the importance of each one. The result of this effort is shown in the table below. (By clicking on the table or pie charts you can enlarge them.) 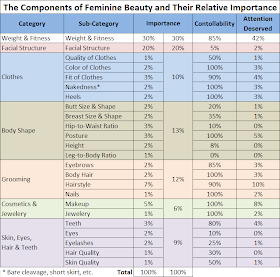 Notes about how I generated the numbers in the table can be found here.

I've also put the data into a few pie charts. This is what you should care about (Importance Rating):


This is what you should spend your time on (Attention Deserved):


Now, even though I have gone to rigorous ends to elicit these ratings from the recesses of my mind, obviously they are still relative to my personal taste. That being said, while men will all disagree over the minutiae of female beauty, few will disagree with the important aspects. This post should give you a solid idea of what matters to most guys, and how much.

While the numbers speak for themselves, I want to highlight one main point: notice how controllable the most important aspects of female beauty are. To wit:


One final pie chart to summarize these three points: 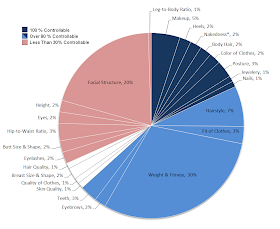 Far too many women fail to recognize the leverage they have over their own appearance. This leverage translates directly into control over the ability to attract men.